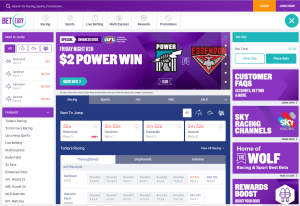 With the advent of online sports betting a number of betting agencies have risen up, offering Australians a wide range of sports to bet on as well as various betting markets. BetEasy has proven itself as one of the giants in the industry, boasting that it is the countries only 100% Australian owned bookmaker. The agency offers betting on a wide range of sports, concentrating on local sports and horse racing although some international leagues are available as well.

Previously named Betezy, BetEasy Australia is situated in the Northern territories with its headquarters in Sydney. It began as a small company with a slightly chequered past. In 2014, the company and all of its assets were bought by Mathew Tripp, who had been a former owner of SportsBet. From there BetEasy grew in leaps and bounds, becoming one of Australia’s top online betting sites. BetEasy is now associated with one of Australia’s top resort chains, Crown Resorts. It offers a loyalty program partnership with the resort chain granting its members access to Crown experiences.

BetEasy underwent a complete overhaul when it changed from Betezy to BetEasy. All of the criticisms were addressed, resulting in a clean and simple interface which is not only easy to use but quick as well. The common three column layout with the sport on the left, market odds in the middle and the betting slip on the right is easy to read and leaves no room for confusion. Two filters appear at the top of the screen for each sport, giving various options for example country and league. Overall, it’s not the best interface aesthetically wise, but it is effective and quick to grasp.

Most sports can be found on BetEasy, although they do focus on the local leagues such as the AFL. Popular sports such as rugby soccer and cricket have a larger number of options than overseas sports such as ice hockey. Horse racing is of course well represented, with not only the big races such as the Melbourne Cup on offer but a number of smaller races as well.

Betting markets are varied as well, with all the usual basic bets such as a win/place bet, and more complicated bets such as quinellas and trifectas. A number of bets and sports can be loaded onto the electronic betting slip at one time, spanning a number of days if required.

It is worth noting that BetEasy does not offer very much live in game betting due to Australian law. A small number of leagues have this option, but punters must phone in to place live bets as it is disallowed online.

As BetEasy is linked to the Crown Resorts in Australia, their loyalty program relies heavily on points which are redeemable at various resorts and experiences around the country. Points can be used not only in hotels but restaurants and retail precincts as well.

BetEasy Specials for new members are run all the time, with free bets and deposit matches changing almost daily. As BetEasy is the fastest growing online betting agency in Australia, new members find themselves welcome and well looked after.